Chinese double boiling is not like melting chocolate over boiling water. It is submerging a ceramic jar containing the ingredients into a pot of boiling water.

Double boiling is frequently associated with melting chocolate. If we try to melt chocolate in a pot over direct heat, the temperature is too high and burn the chocolate before melting properly. The correct way to melt chocolate is to place a bowl of chocolate bar, chips or buttons over a pot of boiling or hot water where the heat is lower. The chocolate will then melt evenly without burning.

The same principle works for double-boiled soup. The soup is cooked using the heat from the boiling water and not directly from the original heat source. Some may think that this is steaming but they are different. It isn't the steam but indirect transfer of heat from water to pot that cooks the food.

The Cantonese (from Southern China and best represented by the people in Hong Kong) likes to double boil their soups so much, they came up with this special ceramic pot known as a double boiling jar 炖盅 (dun zhong).

Soups cooked in these jars are usually served directly in them. So besides being a cookware, they double up as tableware. Small wonder that many have very nice and interesting designs. The one I have now have fishes hand painted using blue paint. Fish symbolises abundance; more than enough. And we Chinese likes a good auspicious symbol.

This soup vessel has 2 covers: a small flat inner cover and a bigger dome-shaped outer cover.

The prepared ingredients are placed in the jar together with just enough water or soup stock to cover the ingredients. The 2 covers are then placed securely on top of the pot. This results in minimum evaporation. It is believed to seal the nutrients and flavor of the ingredients in the soups.

The jar sits semi-submerged in a pot of boiling water. They believe that this will let the soup ingredients slowly release their nutrients into the soup. They also believe that the nutrients and flavour are "locked" in the soup.

ceramic jar in a slow cooker

Cover the pot and heat the water in the jar on medium heat or just sufficient heat so that the water boils but does not boil over. The jar cannot be used directly on the stove top. It will break.

Refrain from peeping into the jar to check on the soup as this will bring the temperature of the soup down and affect the cooking. There is little evaporation so the water will not dry out. The heat from the boiling water outside is also not high enough to cause a boil over.

The only thing to check is that there is sufficient water in the outer pot for boiling.

Double boiling is frequently used to make herbal soups with delicate Chinese herbs such as ginseng and cordyceps. Here are 4 recipes:

Where can I buy this double boiling jar?

This ceramic jar is readily available in departmental stores or hardware stores in Singapore but I have been told that they are hard to find abroad, especially in the US and Europe.

If you do not have or really cannot find it, you can use this technique:

Globalization has really made many things available worldwide. I have never found this jar on Amazon before. But today, in 2019, I found one.

The multiple English names given to this little ceramic jar amuses me. In Chinese, it is simply called the 炖盅 (dun zhong). 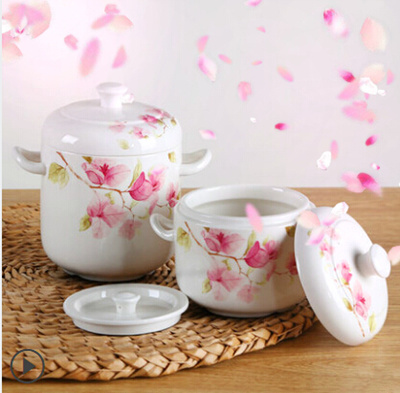 Pictures appearing on this page are not necessarily mine. Click on the image to the original source.

There are affiliate links on this website. If you use the links to make purchases, I get paid a small amount for the sale - at no extra cost to you. I appreciate the support! [Amazon, Shopee]